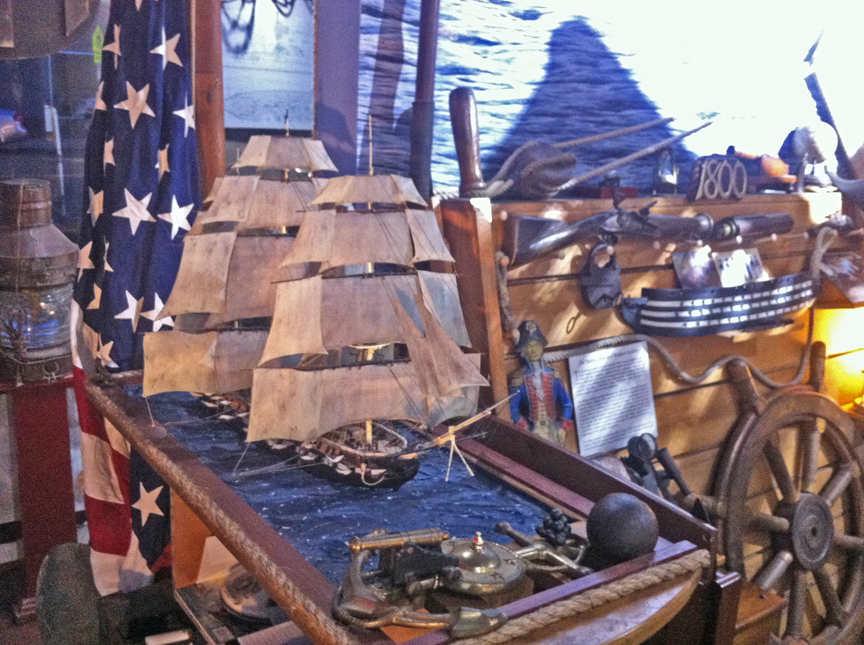 A unique view of the Frigate under full sail, in the water firing a full broadside with crew. Accented with artifacts.The model was completed  in 2016 and is apprx. 2ft. in length and is shown in a antique style diorama. 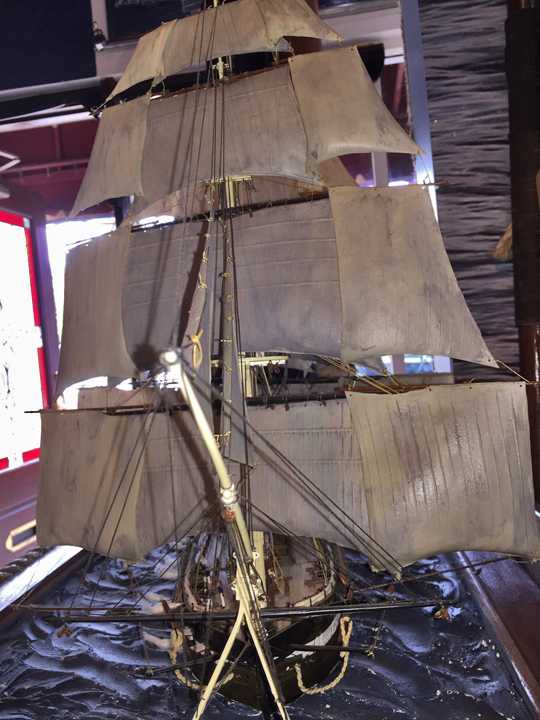 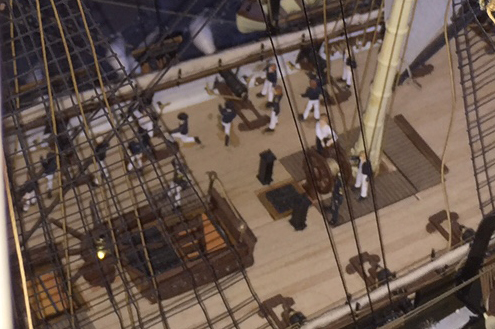 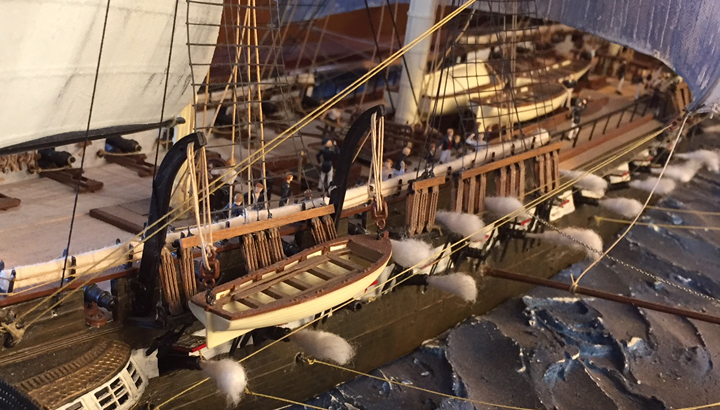 USS Constitution is a wooden-hulled, three-mastedheavy frigate of the United States Navy, named by President George Washington after the Constitution of the United States of America. Launched in 1797, Constitution was one of six original frigates authorized for construction by the Naval Act of 1794 and the third constructed. Joshua Humphreys designed the frigates to be the young Navy’s capital ships, and so Constitutionand her sisters were larger and more heavily armed and built than standard frigates of the period. Constitutionwas built in the North End of Boston, Massachusetts, at Edmund Hartt‘s shipyard. Her first duties with the newly formed U.S. Navy were to provide protection for American merchant shipping during the Quasi-War with France and to defeat the Barbary pirates in the First Barbary War.

Constitution is most famous for her actions during the War of 1812 against the United Kingdom, when she captured numerous merchant ships and defeated five British warships: HMS Guerriere, Java, Pictou, Cyane, and Levant. The battle with Guerriere earned her the nickname of “Old Ironsides” and public adoration that has repeatedly saved her from scrapping. She continued to serve as flagship in the Mediterranean and Africansquadrons, and circled the world in the 1840s. During the American Civil War, she served as a training ship for the United States Naval Academy. She carried US artwork and industrial displays to the Paris Exposition of 1878.

Retired from active service in 1881, Constitution served as a receiving ship until designated a museum ship in 1907. In 1934 she completed a three-year, 90-port tour of the nation. Constitution sailed under her own power for her 200th birthday in 1997, and again in August 2012, to commemorate the 200th anniversary of her victory over Guerriere.

Constitution‘s stated mission today is to promote understanding of the Navy’s role in war and peace through educational outreach, historic demonstration, and active participation in public events as part of the Naval History & Heritage Command. As a fully commissioned U.S. Navy ship, her crew of 60 officers and sailors participate in ceremonies, educational programs, and special events while keeping the ship open to visitors year round and providing free tours. The officers and crew are all active-duty U.S. Navy personnel and the assignment is considered to be special duty in the U.S. Navy. Traditionally, command of the vessel is assigned to a Navy commander. Usually berthed at Pier 1 of the former Charlestown Navy Yard, at one end of Boston’s Freedom Trail, on 18 May 2015 Constitution entered Dry Dock 1 in Charlestown Navy Yard to begin a three-year restoration program.[8]

In 1785 Barbary pirates, most notably from Algiers, began to seize American merchant vessels in the Mediterranean. In 1793 alone, eleven American ships were captured and their crews and stores held for ransom. To combat this problem, proposals were made for warships to protect American shipping, resulting in the Naval Act of 1794. The act provided funds to construct six frigates, but included a clause that if peace terms were agreed to with Algiers, the construction of the ships would be halted.

Joshua Humphreys‘ design was unusual for the time, being long on keel and narrow of beam (width) and mounting very heavy guns. The design called for a diagonal scantling (rib) scheme intended to restrict hogging while giving the ships extremely heavy planking. This design gave the hull a greater strength than a more lightly built frigate. Humphreys’ design was based on his realization that the fledgling United States of the period could not match the European states in the size of their navies. This being so, the frigates were designed to be able to overpower any other frigate yet escape from a ship of the line.

Primary materials used in her construction consisted of pine and oak, including southern live oak, which was cut from Gascoigne Bluff and milled near St. Simons, Georgia. Her masts were of white pine from Maine.Samuel Nicholson, who would become the first captain of the ship, offered the owner of the Old Avery Oak Tree“the unheard of price of $70” to buy the tree to harvest the timber for the keel, but the owner would not sell.The keel was ultimately constructed from an alternative white oak tree, sourced from New Jersey.

The name Constitution was selected by President George Washington. Her keel was laid down on 1 November 1794 at Edmund Hartt‘s shipyard in Boston, Massachusetts, under the supervision of Captain Nicholson and naval constructor Colonel George Claghorn.Constitution‘s hull was built 21 inches (530 mm) thick and her length between perpendiculars was 175 ft (53 m), with a 204 ft (62 m) length overall and a width of 43 ft 6 in (13.26 m).In total, 60 acres (24 ha) of trees were needed for her construction. Paul Revere forged the copper bolts and breasthooks. The copper sheathing, installed to prevent shipworm, was imported from England. 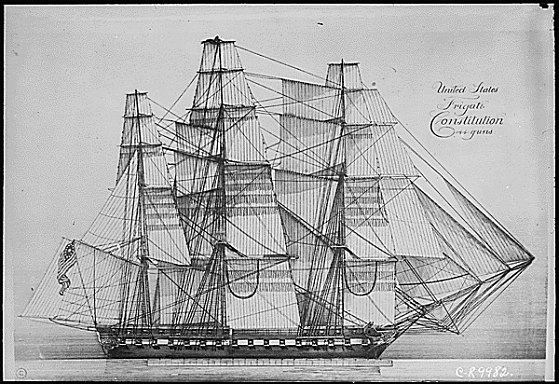 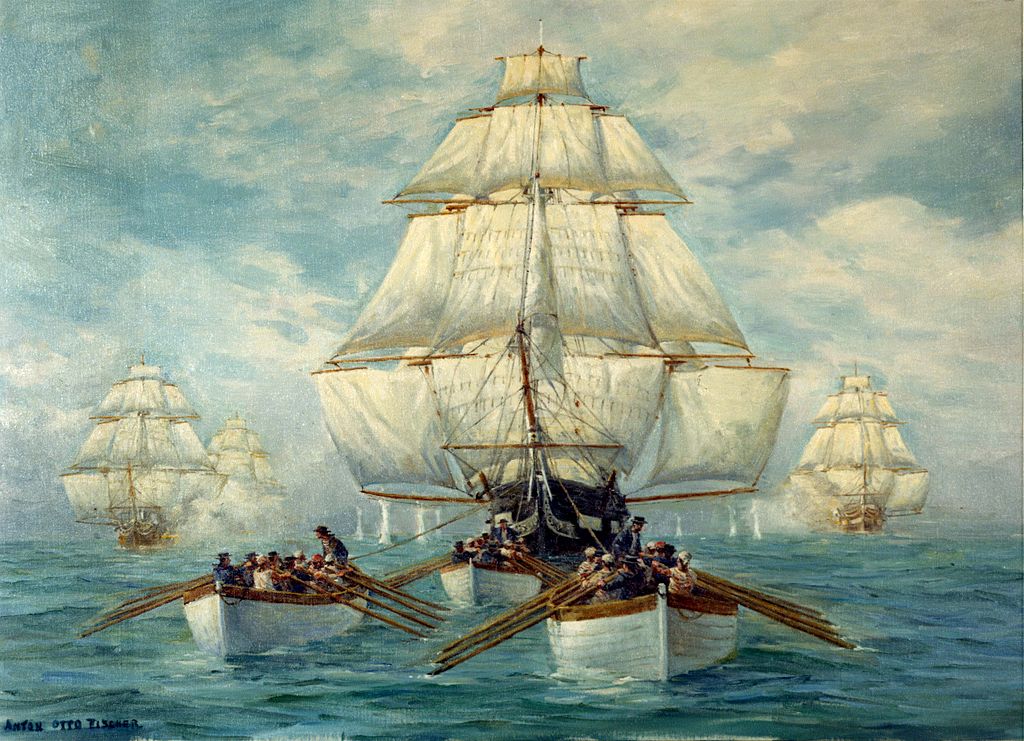